Series: EXCAVATIONS.
This series explores the idea of an archeology of the future. A future in which the technology we use daily, viewed in a historical context, is seen as tribal objects utilised in the past for unknown and mystical reasons.
The focus of the research behind these works is the creative relationship between human and non-human intelligences, with the pivotal point of the argument being that technology sits in the camp of human intelligence. The triad that conceptually drives the theory and creates the works, is the intertwining between technology, man and nature. Via assemblage of collected objects from nature, personal experiences, and technological items each work unearthed the idea behind it.  There are 4 works in the series: Aegis, Bladerunner, Amphisbaena and Incensus. 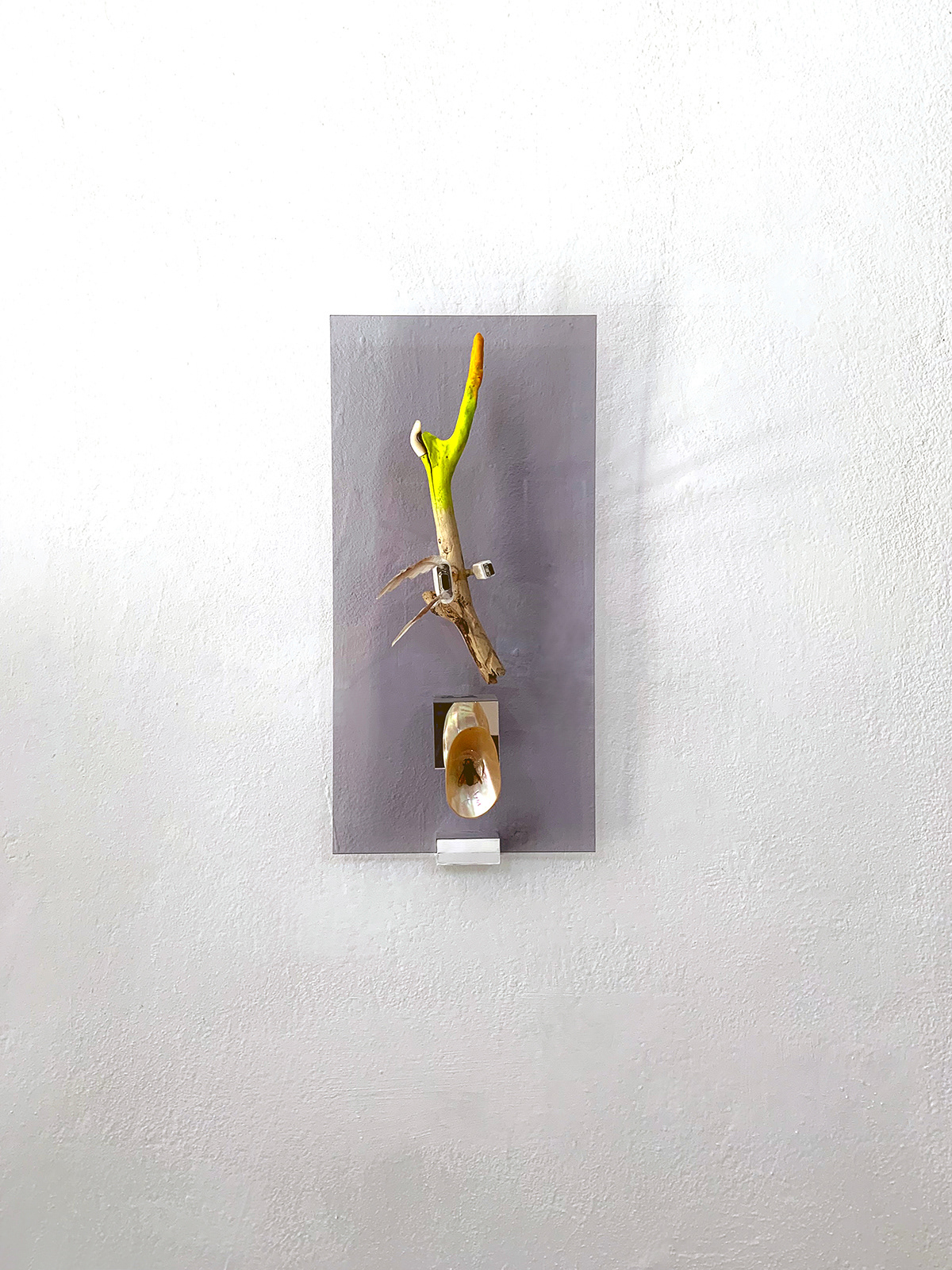 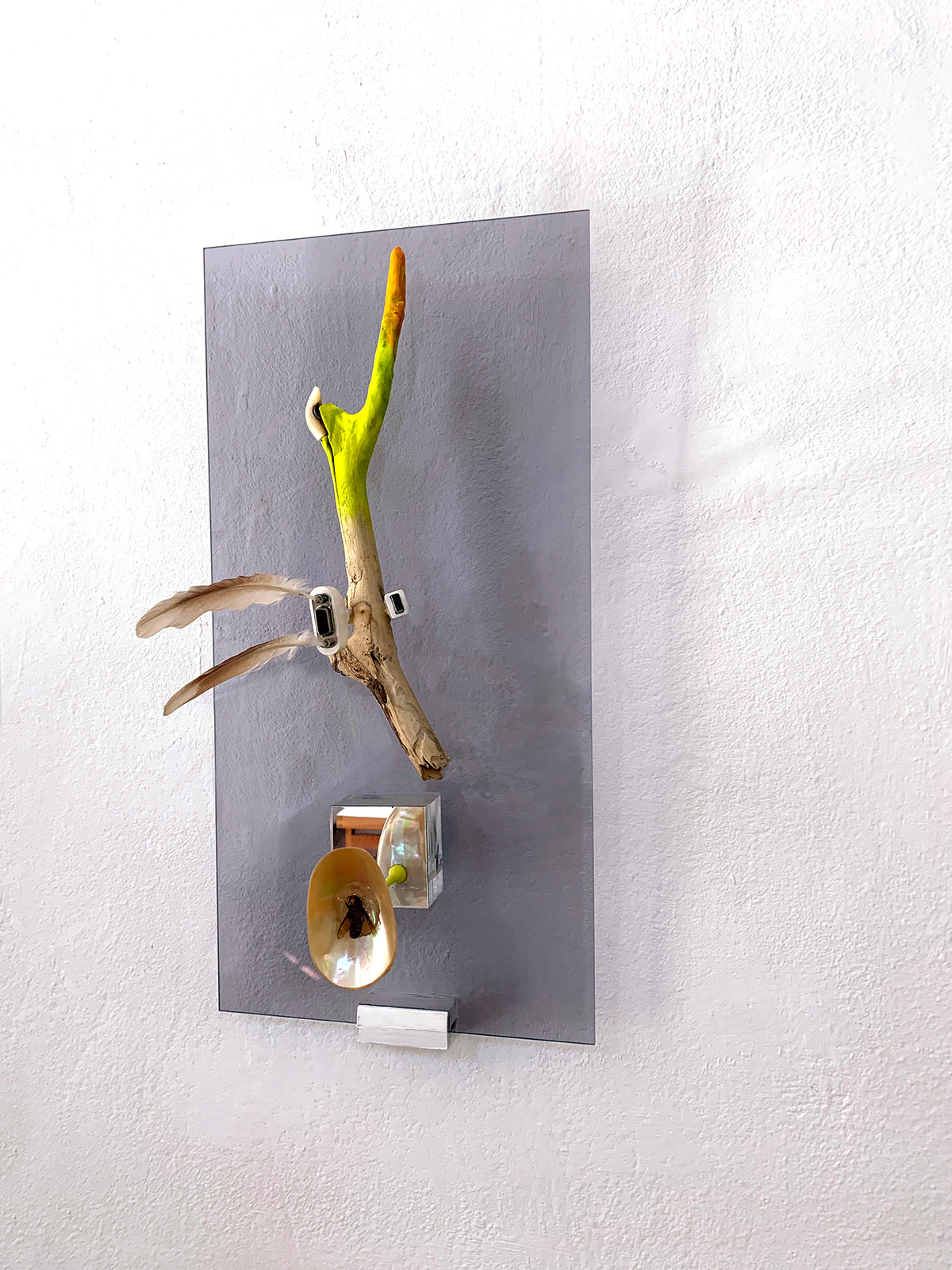 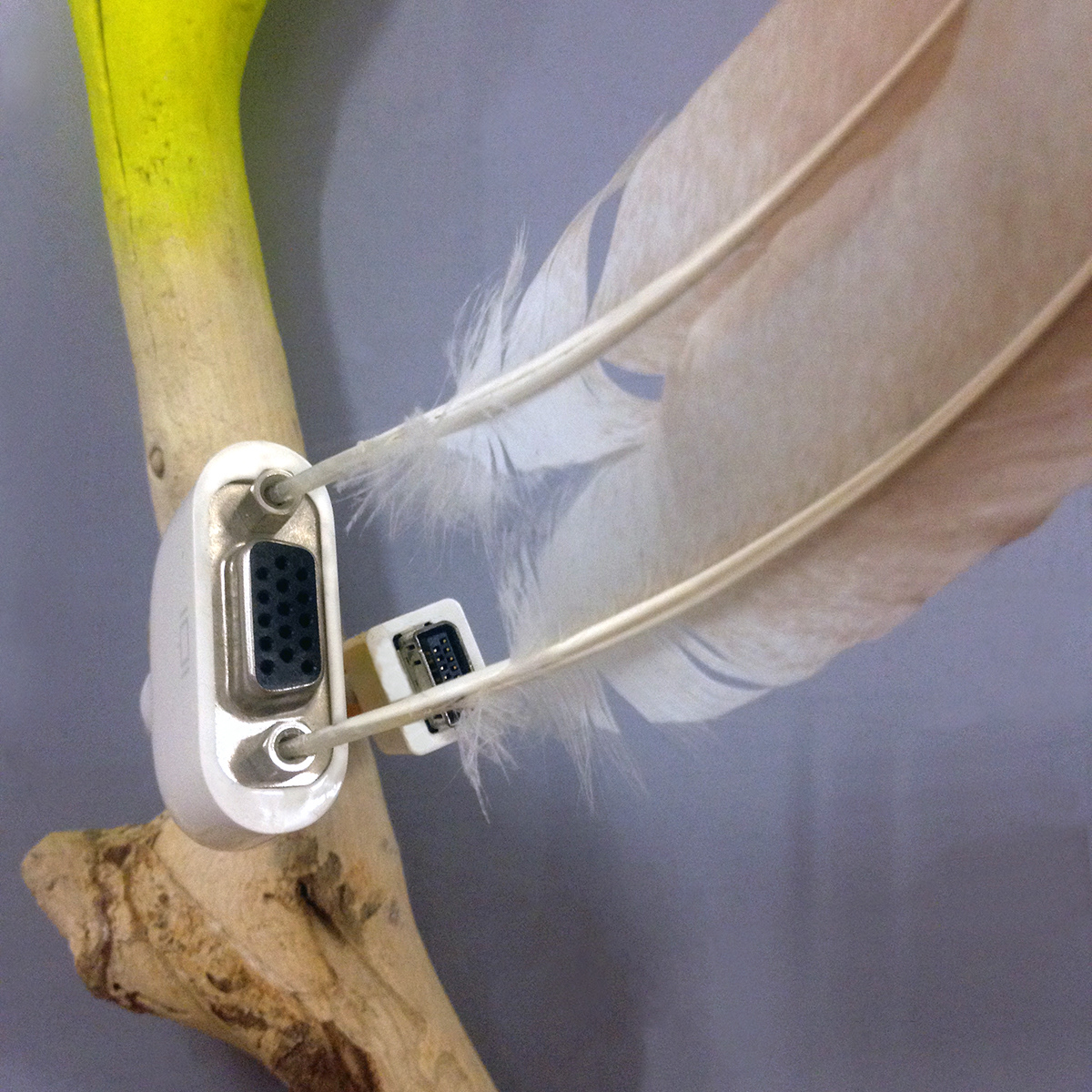 BLADERUNNER wood, shell, red pigeon feathers, bee corpse, mac adaptor, polymers, acrylic glass, 250x500mm
In the fantastical worlds of the future most animal species are endangered or extinct so that owning an animal is a sign of status and empathy, and the blade runner is one who runs with feathers attached to their legs because the lower part of their legs are missing. 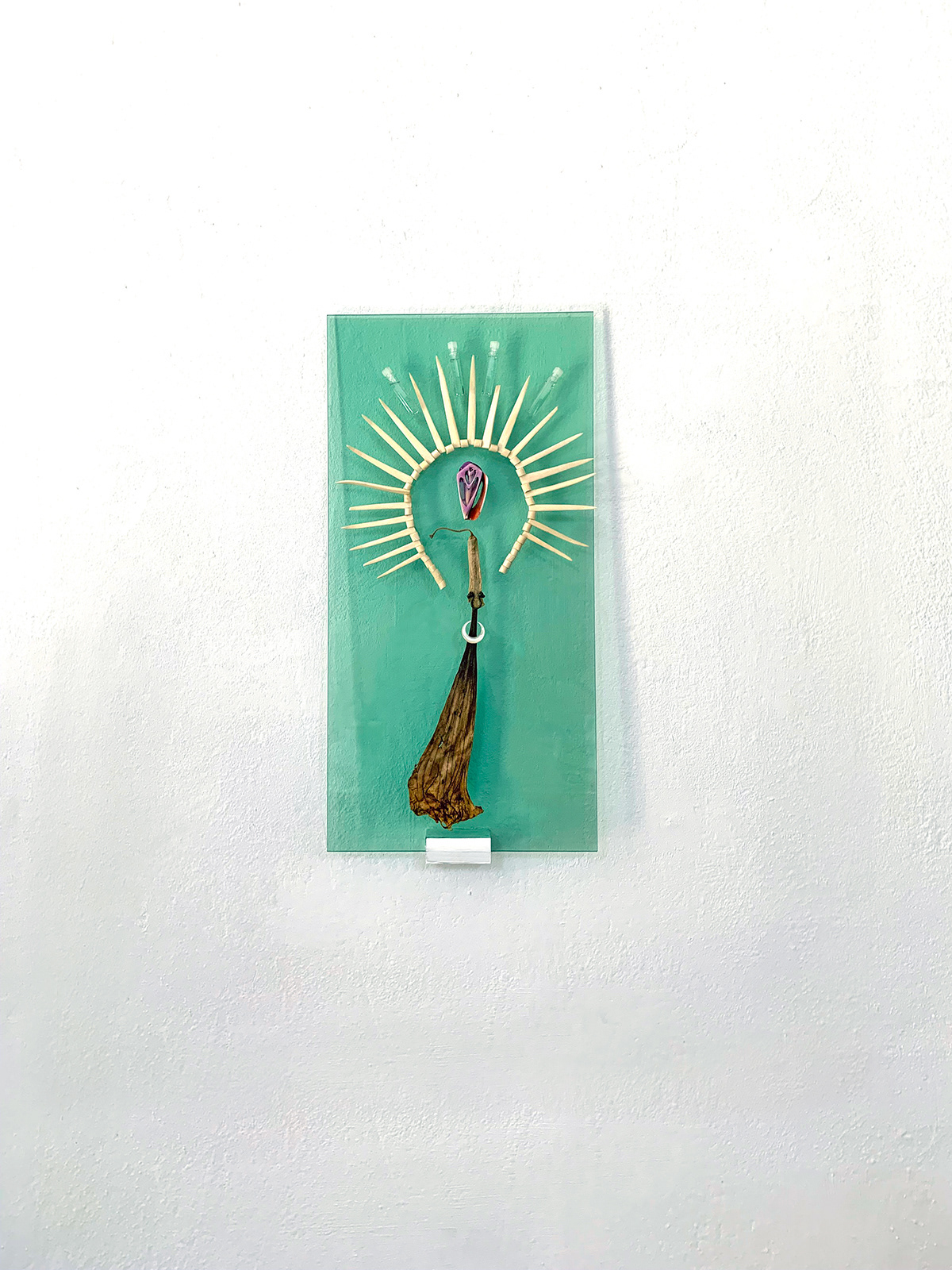 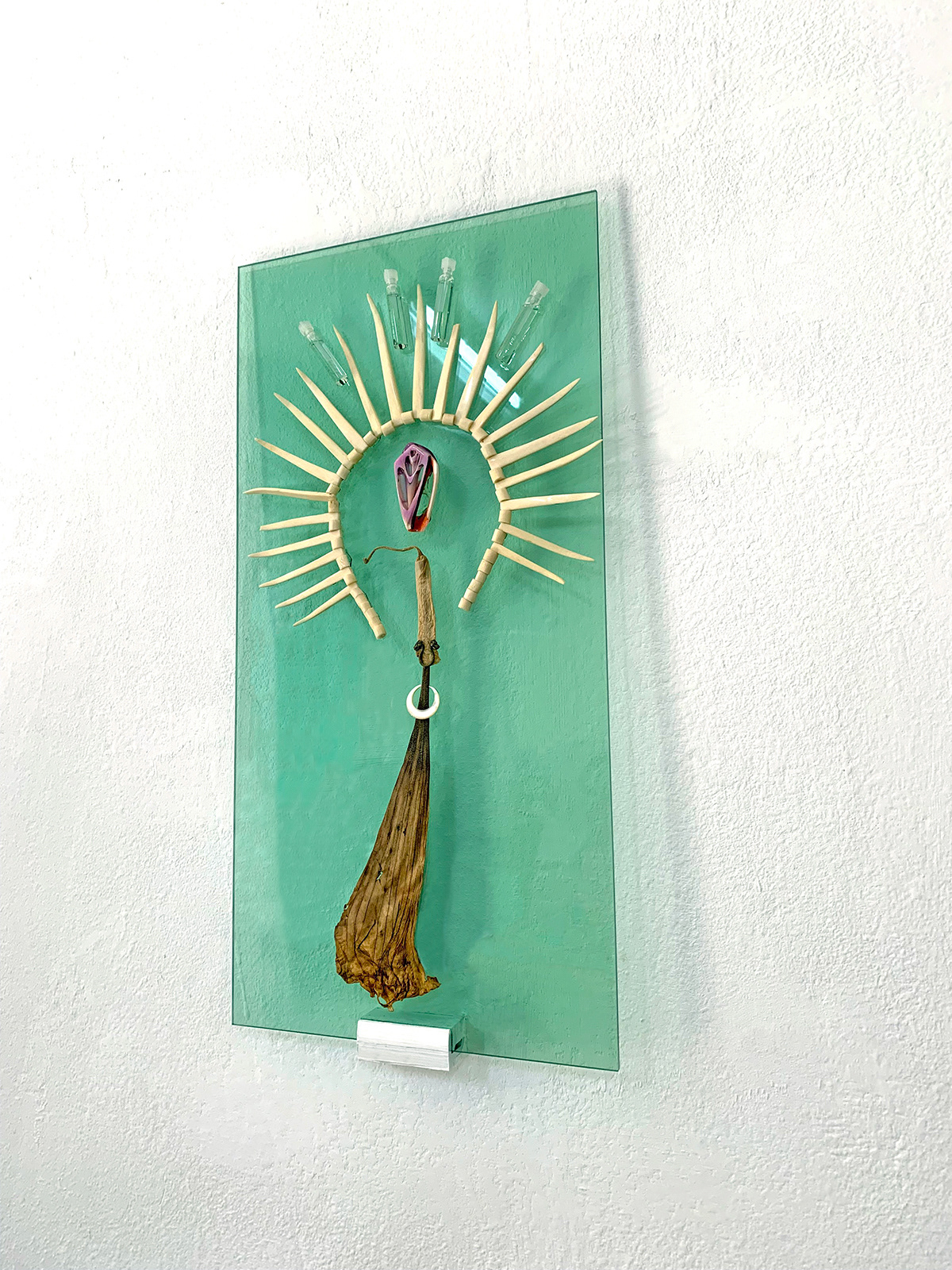 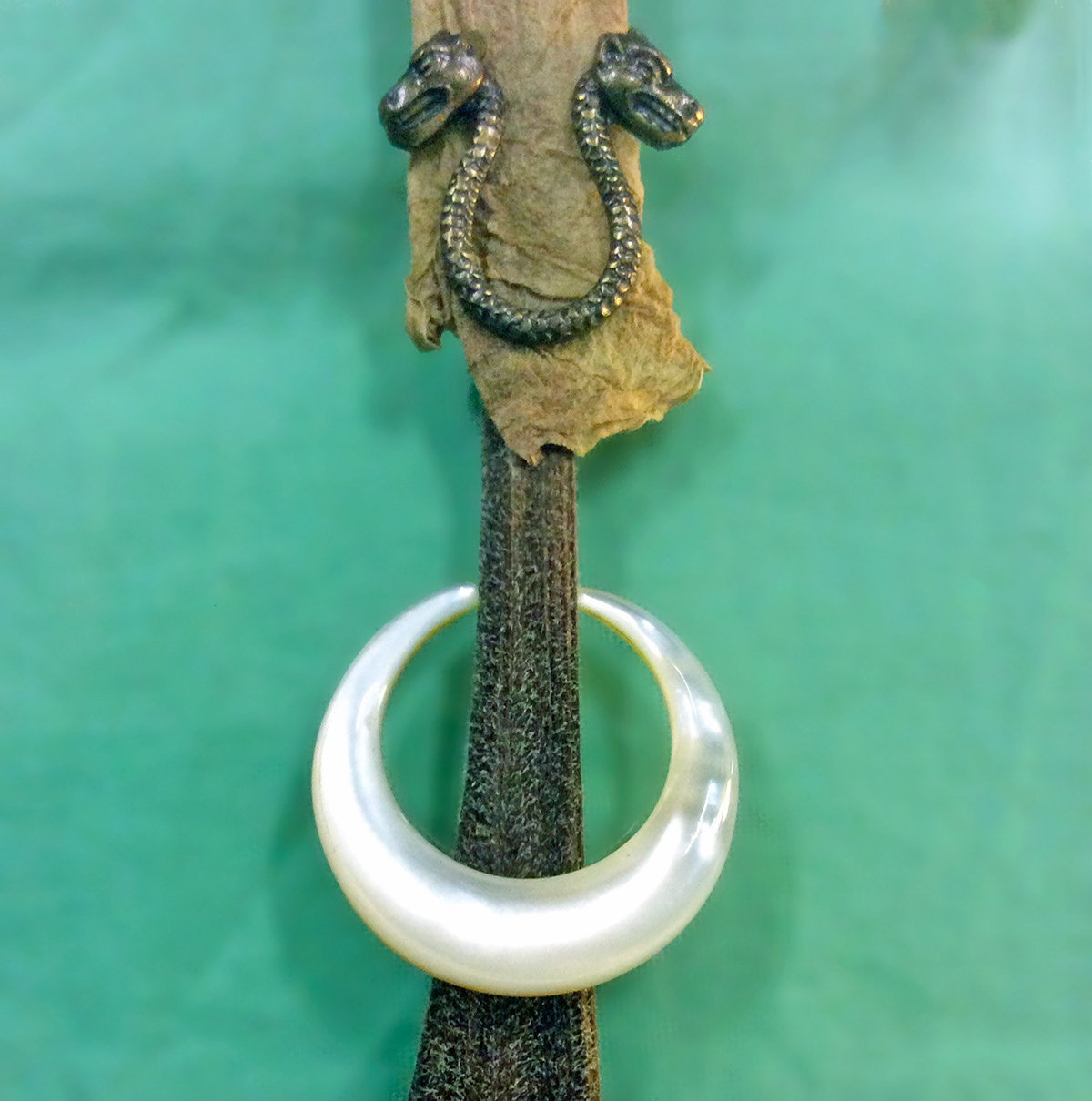 AMPHISBAENA horn, shell, peruvian flower water, datura flower, pigments, polymers, acrylic glass, 250x500mm​​​​​​​​​​​​​​
The Amphisbaena is a serpent in classical mythology that has a head at each end and is capable of moving in either direction. The name comes from Greek - 'amphis' meaning both ways and bainein meaning 'to go'. It was considered if one utilised this panel as backdrop when taking a selfie one could impart the power of the perfume god and would communicate to ones followers the idea of being non-binary. 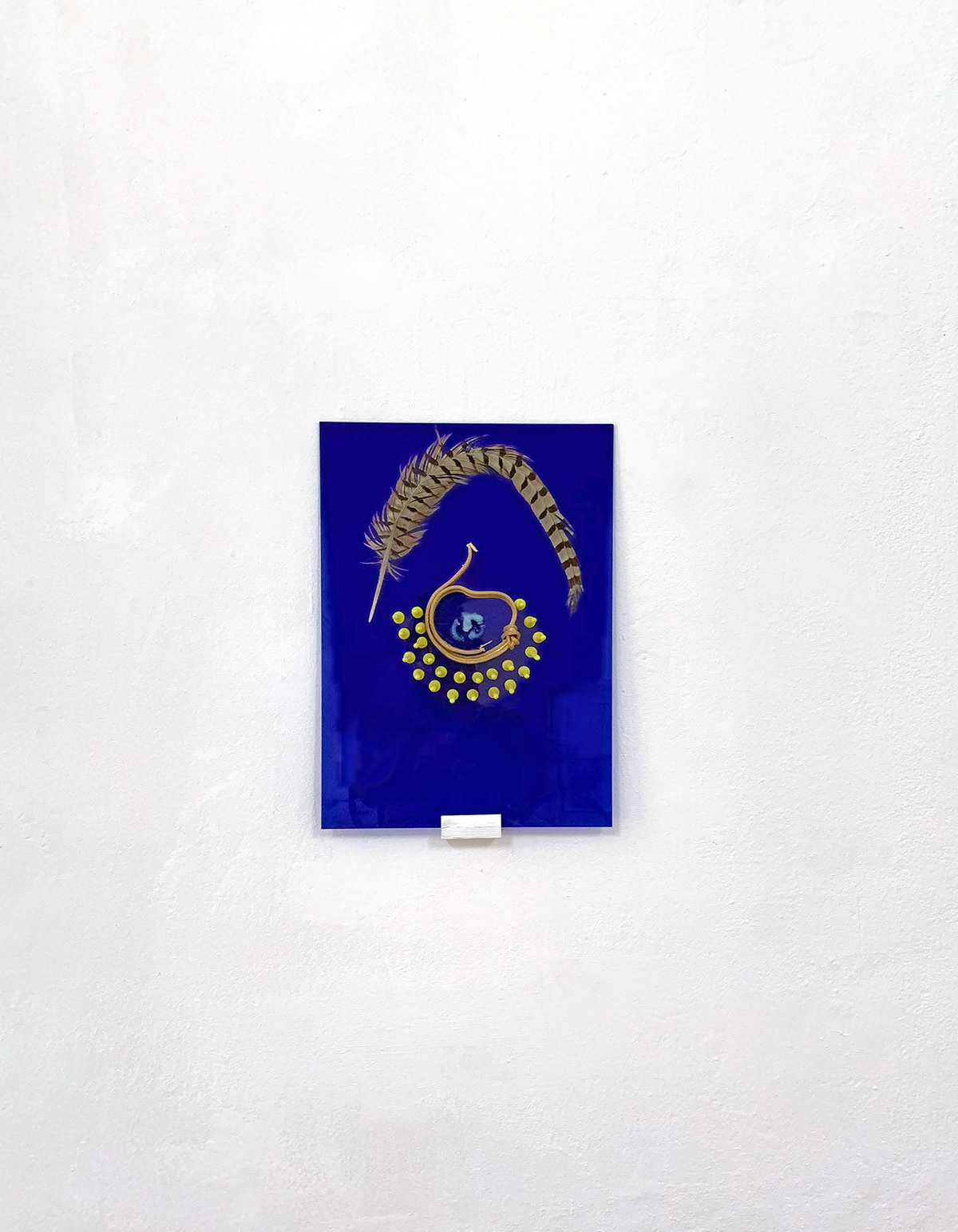 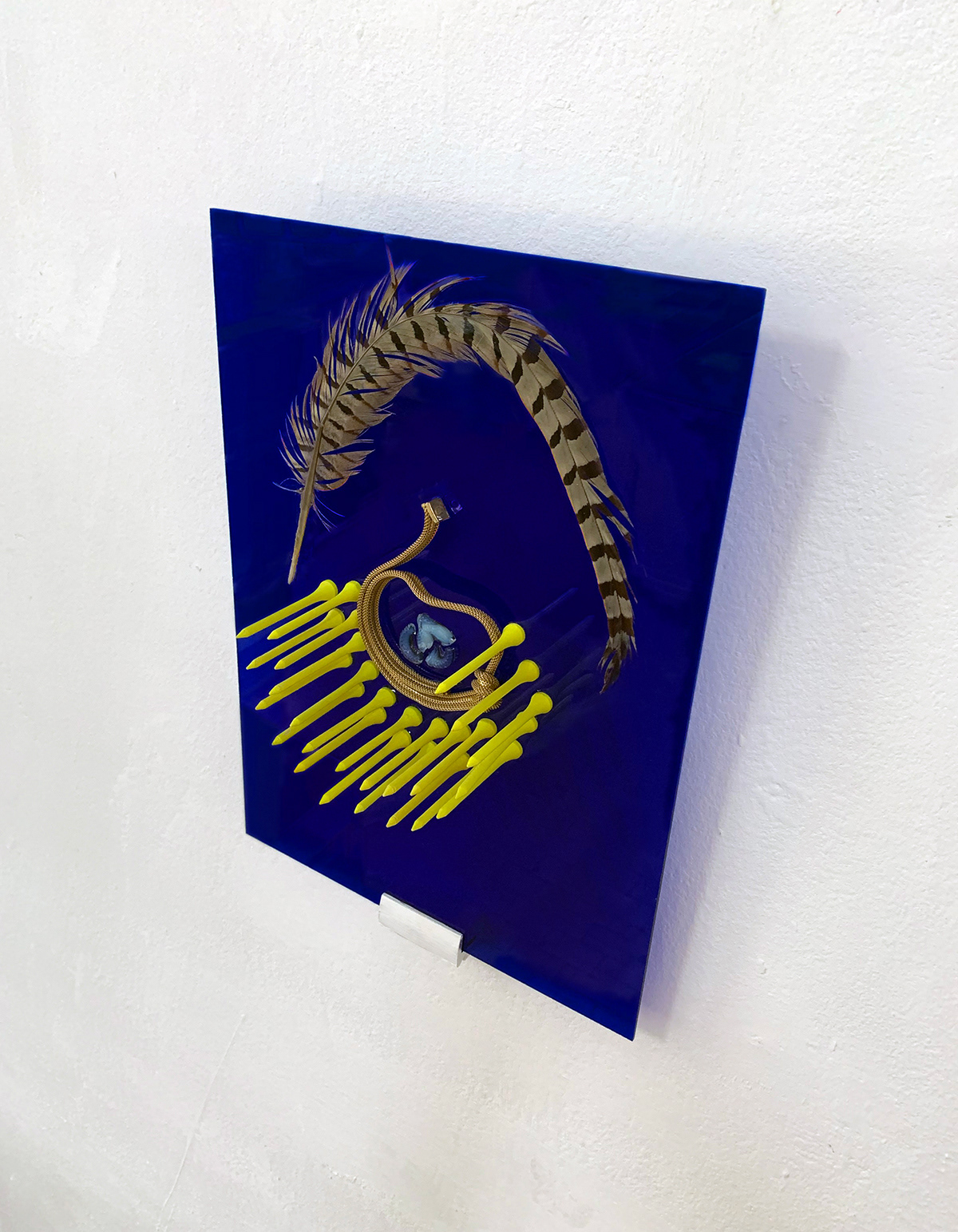 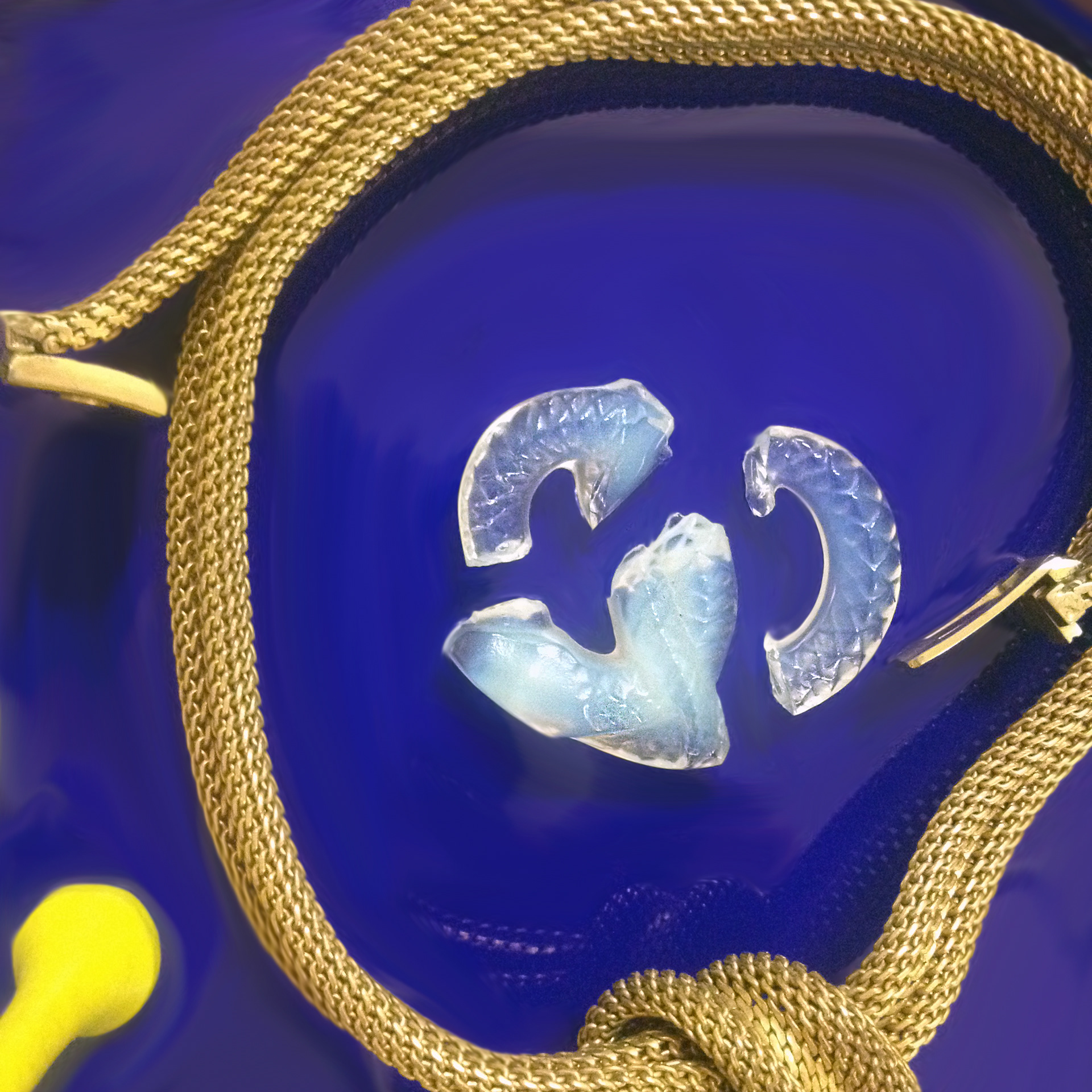 AEGIS shell, lalique crystal, gold plated bronze, wood, acrylic paint, acrylic glass 290x380mm
The Aegis is a protective shield or animal skin from greek mythology. In occult fields the snake is a symbol of the creative life force, whilst pheasants are considered to be symbols of sexuality, power and ego. The pheasant neither sings nor flies much, and unlike other birds, nests on the ground rather than in trees. For these reasons it is said to be disconnected from the spiritual rather than being part of it. 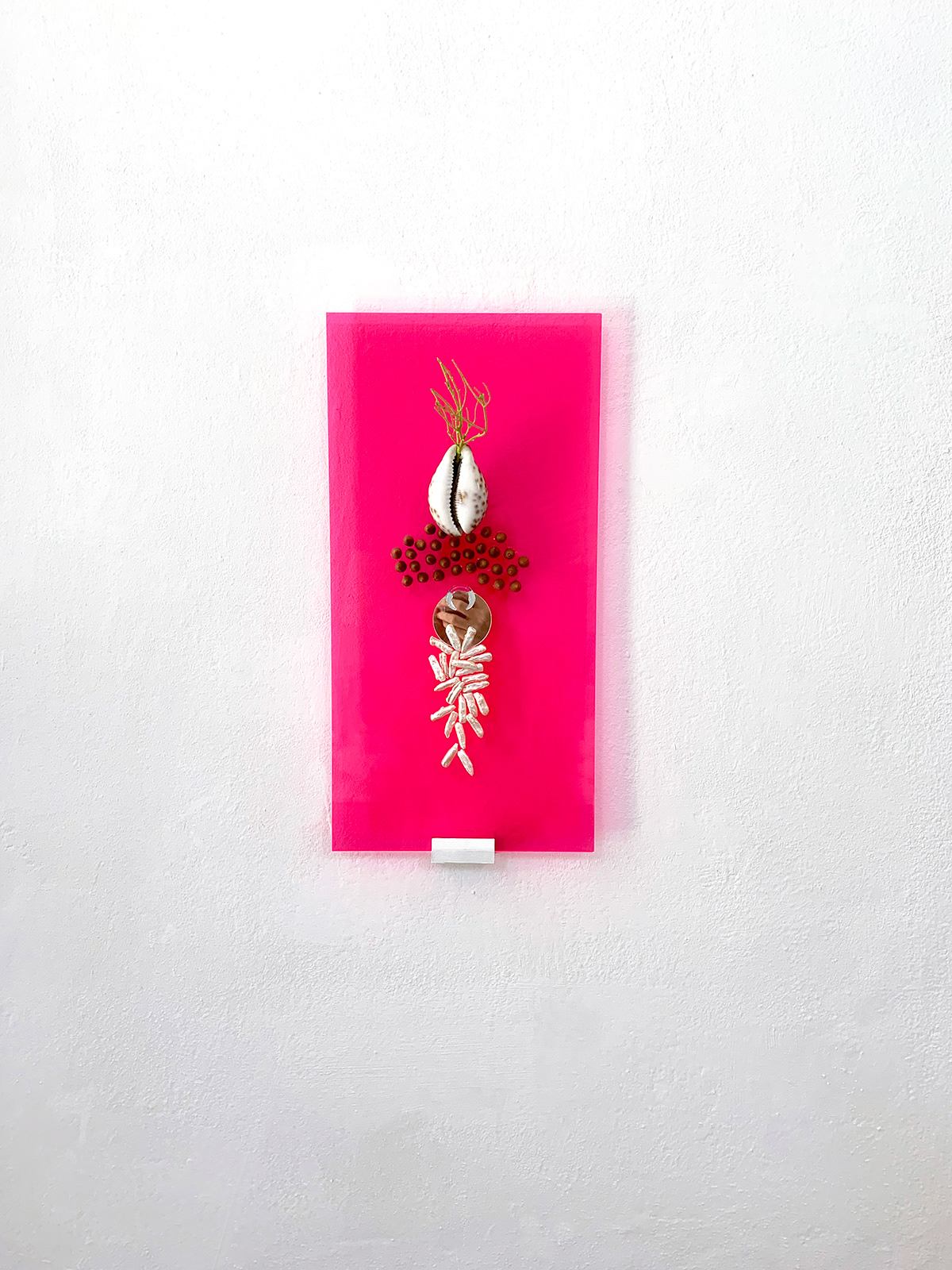 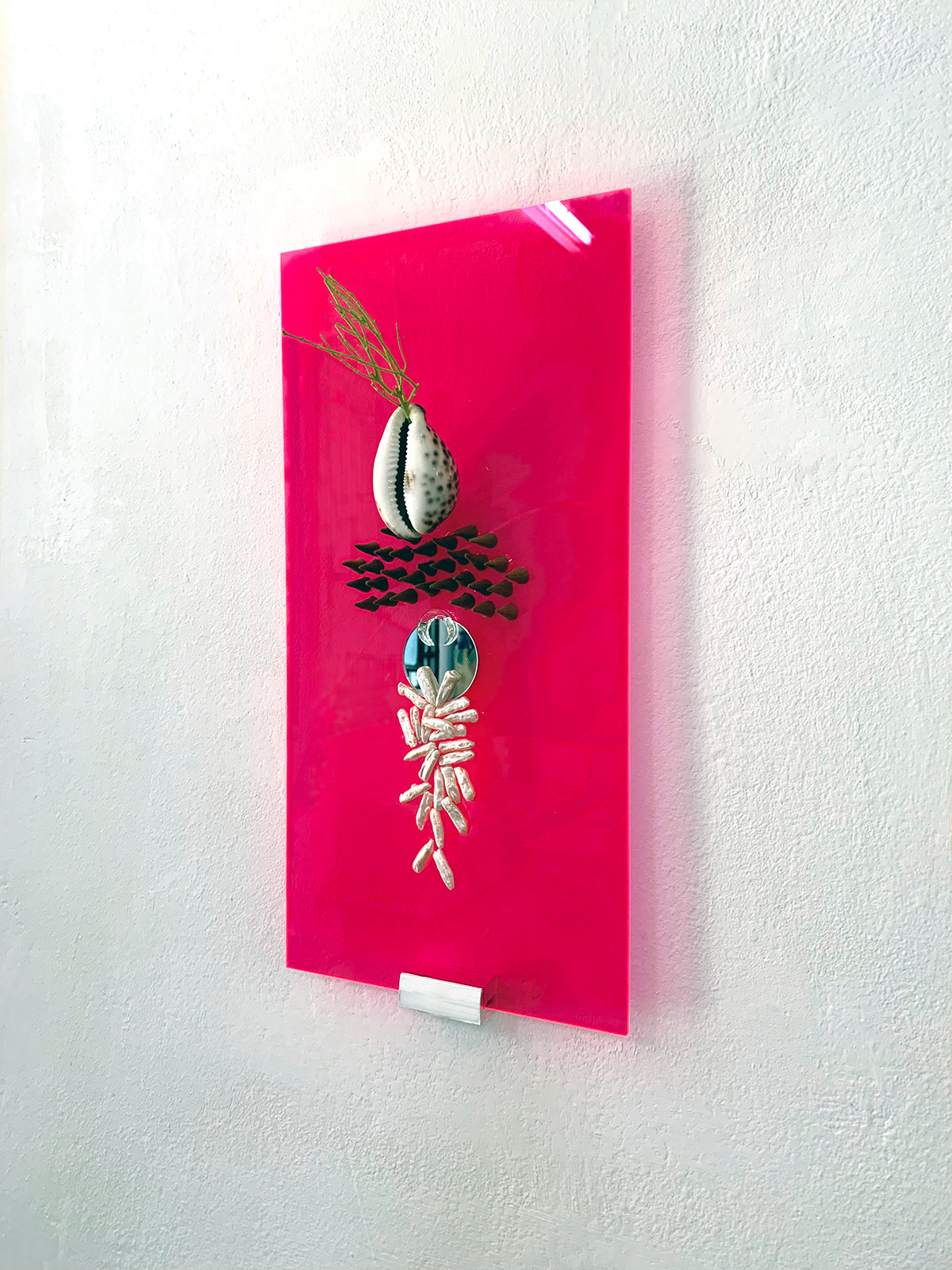 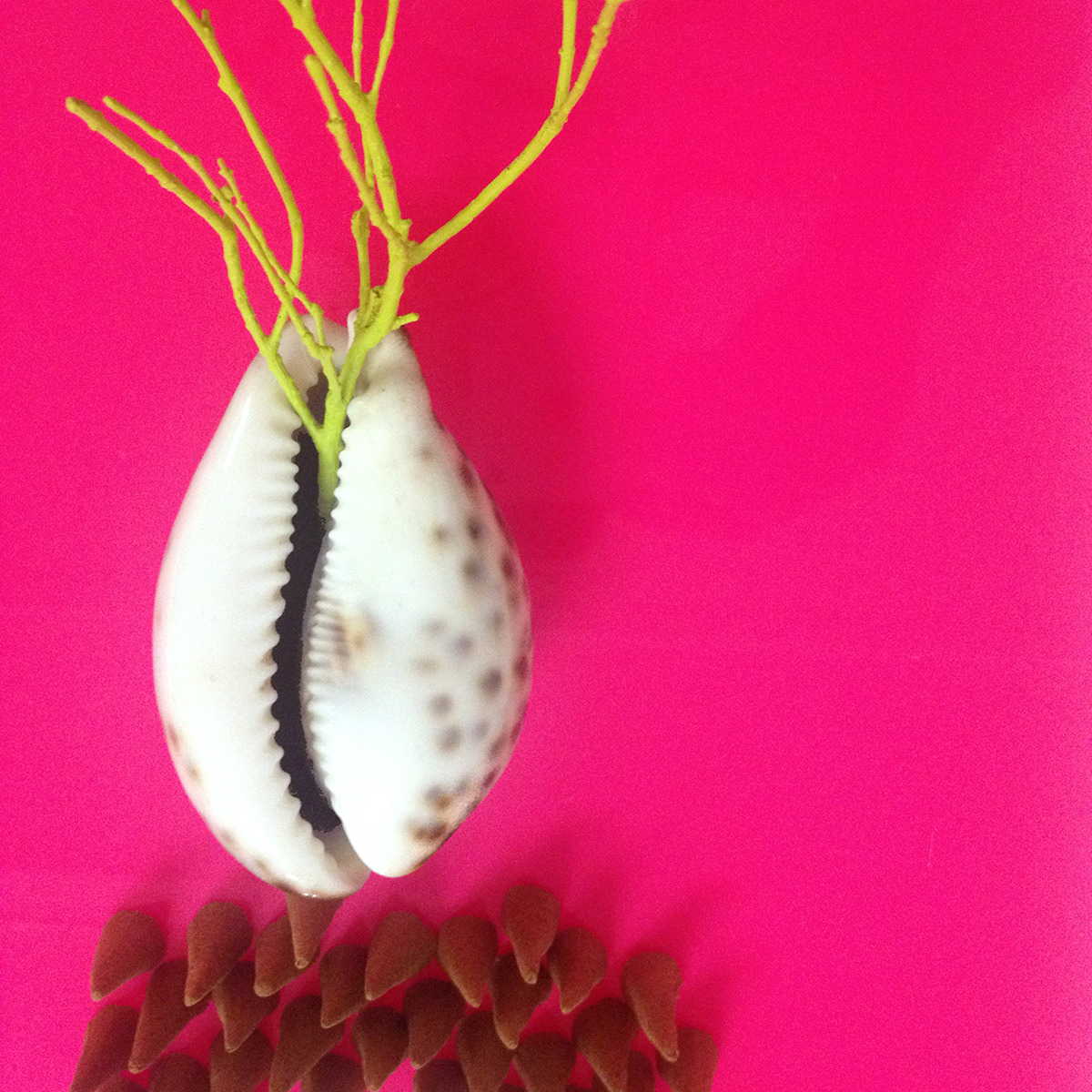 INCENSUS wood, natural pearls, shell, incense, mirror, resin, fluorescent acrylic glass, 250x500mm
The Latin word Incensus means to set on fire, to be ardent, passionate. Incense is aromatic biotic material that releases fragrant smoke when burned, and the word incense as a verb signifies 'to make very angry'. A pearl is a hard, glistening object produced within the soft tissue of a living mollusk, formed when the animal is irritated by a foreign object trapped in its mantle. To protect itself, the mollusk secretes a substance called nacre the same substances it secretes to form its shell. The layers are deposited around the irritant and it grows over time, forming the pearl.
Real pearls will not burn In fire.

EVOLUTION NOT REVOLUTION
↑Back to Top